Disturbed dreaming is a little broader than nightmares, and includes bad dreams as well. So I look at nightmares and disturbed dreams in relation to regular dreams. But I also look at sleep quality in general — dispositional characteristics as they relate to and affect sleep quality. There are huge challenges.

They can do all sorts of controlled studies. Someone like me, who does not have access to a sleep lab and works with the general population using questionnaires, has the challenge of self reported data and cannot closely monitor sleep itself. I try to get prospective data — data collected ongoing over multiple days — rather than retrospective date — asking participants about the past several weeks of sleep.

Experimentally I can only control variables during waking time and relate them to self-reported sleep patterns. Is it that disturbed dreaming and nightmares is causing the effect, or is that it they also have a high affective stress? So I try to statistically tease out which things are contributing most to the outcomes. What we can study is REM sleep. As soon as I want to know about the dream, which is a narrative, I have to wake you up and ask you about it.

And humans, we like to tell stories. Because we make sense of nonsense.

So I always question, is that what people are doing when they tell me about their dream? Are they making sense of nonsense, or telling me the memory of something that actually did have meaning? One of the things that comforts me is the thought that since what we do is make sense of experience, well, dreams are an experience. Even if originally it was a bit nonsensical, the fact that it has an impact on us is relevant. And what that impact is and how it helps us operate and adapt and adjust to our world is relevant.

What happens during the process of dreaming is the logical part of the brain — the frontal cortex — the logic that we typically constrain thought with is loosened. And so we can make all sorts of associations between experiences in a more creative way.

A less structured, biased or heuristically organized way. And that lets us see things in a new light and helps us grow. Particularly with recurring nightmares. Think of it like a skip in a record. So you have recurring nightmares until you are able to organize it.

There could be physiological proclivities to disrupted or non-disrupted sleep, bio-rhythms, et cetera. There could be psychological experiences and history, as I talk about in the model I work with, in terms of affective stress: The type of stuff you bring to the table dispositionally that can affect how well you sleep. And then there are the social or environmental factors; some people are more sensitive to environmental stimulants than others. Things like intoxication, alcohol withdrawal and long-term antidepressant use can cause unrestful REM sleep symptoms similar to the sleep behavior disorder.

Also, normal people may occasionally move during REM sleep without necessarily having the disorder. 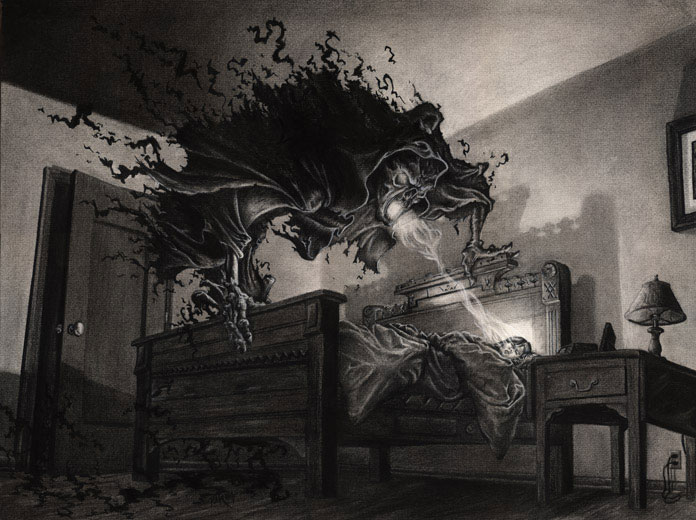 The prevalence increases to 2 percent over the age of 60 and to 6 percent over the age of By mapping the REM neurocircuitry, he added, scientists may be able to create clinical tests to spot those with bonafide disorders. At first, that idea sounds more like science fiction than science, because it requires using non-lethal viruses to genetically modify brain cells so they can be activated by light — in the case of optogenetics — or by a drug. But professor Dan agreed, and she highlighted an upcoming clinical trial that plans on using optogenetics to turn on neurons in the eye to treat blindness.

The U. Food and Drug Administration gave the trial, which is being led by the biopharmaceutical company RetroSense Therapeutics, a green light to proceed in late August. It will be years before this technology can be used for a condition like narcolepsy, REM sleep behavior disorder or as a tool to switch off vivid or traumatic dreams, so Peever believes the key goal now is discerning as much about the REM circuit as possible, so future techniques can be put to good use.

Sleep, overall, seems critical for survival. They die within a year or two. I want to shut the valve on my vivid dreams by tweaking or wiping my REM sleep. That, by comparison, appears less hazardous. Antidepressants are known to eradicate REM sleep by upping the brain levels of monoaminergic neurotransmitters, like noreadrenaline and serotonin.

The same article cited a case of a patient who lost REM sleep after a brain injury, but then went to law school and became the puzzle editor for a Tel Aviv newspaper.

Can you tell us a bit about the nature of your research, and whatever you’re working on now?

However, there could be side-effects of losing REM. A dip in learning might be a dealbreaker for some folks, like kids prepping for an exam, but there might be people willing to sacrifice such learning for a loss of their dreams, such as war veterans who suffer from vivid nightmares due to post-traumatic stress disorder. For now though, my dreams and my nightmares , are my own, as I ponder a dreamless future. That place where you still remember dreaming? For secure communication, he can be reached via Signal Support Provided By: Learn more.


Close Menu. What do you think? Leave a respectful comment. Close Comment Window. Impeachment Inquiries November 20, Watch. Who is testifying next? By — Nsikan Akpan Nsikan Akpan.